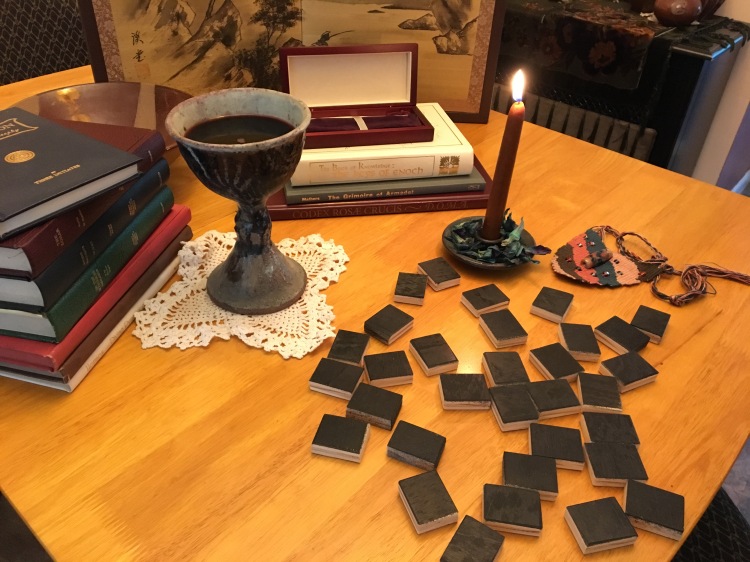 Many years had passed since anyone had tried to consult the tiles. Iona had the gift, not Nanna, but she did know how to work with them. She had always known she would one day teach Sonsee whom, they both hoped, had inherited her mother’s talents. But now Nanna needed to try.  It was the only way she knew to get an answer.

Each tile had a picture on it. Each picture had a meaning. The trick, Nanna knew, was in putting the pictures and their meanings together to get the answer you sought. Iona could do that perfectly. Nanna could only follow the steps and hope the tiles would talk to her, hope she would understand their true meaning. She could only do her best. But would that be good enough to find Sonsee?

Nanna thought back to what Iona had taught her. The first step was to phrase the question precisely. Ambiguity in the question meant ambiguity in the answer. And yes-no questions were the hardest to decipher. But Nanna decided she had to try anyway.

After pouring herself a goblet of wine, Nanna sat at the table in her apartment, pushed everything out of the way, and dumped out the tiles. First, she surveyed the pictures on each, remembering as best she could each meaning. Then she turned them all up-side-down and took a sip of wine.

Nanna moved her open palm over the tiles, waiting for one to call to her. None did.

Is Sonsee-array alive somewhere on this island?

Again she moved her palm over the tiles but none called to her.

Maybe I need a connection to Sonsee. Nanna pulled the amulet from her pocket and removed the bronze embellishment. She held it in her hand as she once again scanned the tiles. One pulled at her consciousness. She picked it up and turned it over.

Death, she pulled the tile for death and sat back with a gasp as once again, her grief overwhelmed her senses. Her vision narrowed and she stared at the tile next to the embellishment. Iona’s embellishment.

She scanned the tiles and one called to her, so she picked it up. It was the mountain shrouded in purple mists. Iona meant “purple jewel” and Iona always said this tile was her special one. Relief flooded over her, but Nanna did not want to let her hope run too high.

She picked up the amulet and studied it. The middle bead, the one she had made all those years ago, might taint the reading. She could cut it out, but if a spell had been woven around it, that would break that spell. No, she decided, better to cut some of the yarn from the braided ends and hope Sonsee had put energy into them.

This she did and tried again. Tell me about Sonsee-array.

Before she could even move her palm across the tiles, the light of the candle twinkled on the surface of one. Nanna smiled. It was a sure sign this would give her the answer. She turned it over. Iona had called this tile the cyclone hole and it meant “look deep within for the answer.” Deep within Nanna had always felt Sonsee was alive, but what if that was just wishful thinking? Even now she did not know how she felt deep within. It was all so confusing, trying to separate her emotions so she could read the tiles properly. She tried again.

This time she got the seven pointed star, Venus, Sonsee’s birth star. But it also meant the gateway to the above and beyond, or perhaps the spiritual home of Nanna and Iona’s people far across the sea. Again only confusion. If only Iona was there, she would know which meaning was the right one.

But Iona was not here. Nanna put Sonsee’s tile face up on the table and asked again.

Please clarify the last tile. She moved her palms across the tiles again and one called to her, even stronger than had the others.

The blowing leaf. It was part of a trio of tiles representing the parts of a tree. The trunk was sturdy and strong because of its roots, the top healthy because all the leaves and branches worked together. But the leaf blowing in the wind had become unattached to its roots and would die. Would die, Nanna reminded herself. Not dead now. The leaf was very much alive.

She turned the leaf and the star over and placed them in with the others, then moved them around three times with her hands. Three times, Iona had told her. If you change the subject, your must move them all about three times.

Tell me about this amulet.

This time she picked the bird—a message. From Sonsee, she was sure of it. But where was Sonsee? Without thinking it through, she asked her next question.

Where did it come from?

Nana picked another tile and when she turned it over, her heart seemed to pause, and then open in relief. It was the seven pointed star. A confirmation Sonsee had sent the message.

It is all in how you phrase the question, Iona had told her. Nanna placed the two tiles face down and stirred them three times.

When she turned the tile over, she saw the devil tower, a picture of a devil guarding a tower of stone. The underlying meaning was “evil” but was the message more solid than that? Was the answer the tower where Iona had been imprisoned? It was so hard to know w/ the tiles. Iona had once told her to simply open her mind and she would know which meaning was true. It would be the one that comes so strongly she could not ignore it. In the old country it was said Iona’s mother and all their mothers had all carried the gift of knowing. But Nanna did not.

Certainly the tower could be Iona’s prison tower, the evil could be M’Lady—but was it a different evil? When nothing more came to her, Nanna replaced the tile and stirred them three times. So far she had asked about the past. Now she concentrated on the future. But as she stirred them, one fell off the table and onto the floor. When she reached down to retrieve it, her eyes flew open in shock. The volcano—destruction. She picked it up and placed it back with the rest, trying hard not to focus on its meaning. Just to be sure she stirred them three more times.

How can I get to Sonsee?

The tile she picked was water, the element of water. By boat. The tower was located high on the cliffs above the ocean. But how could she ever scale the cliffs.

How do I get Sonsee-array out of the tower?

Almost beyond her volition, Nanna’s hand reached for the next tile. The volcano—destruction.

Frightened now, Nanna quickly scooped all the tiles back into the box and left to find Sonsee’s father.