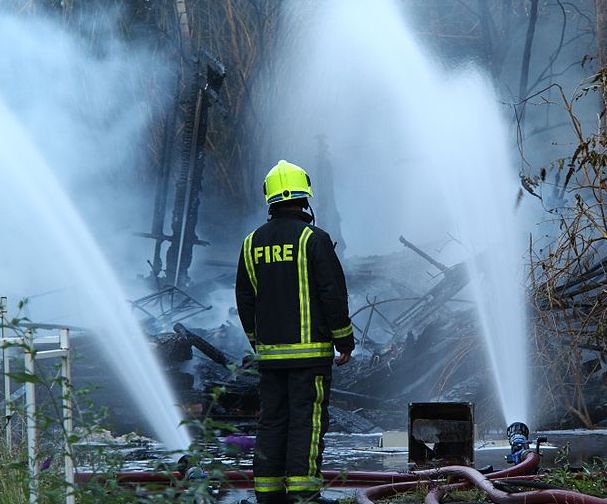 Ignoring the scorching heat, Owen pointed to the pile of burning timbers that had been Jacob’s cabin. Despite the water poured onto it, the fire had caught again, this time with an unnatural fury. Owen watched as the flames pranced around, shot into the air, and concentrated themselves in just one area, the area near the old cupboard.

Within seconds a breeze blew through, and then the wind picked up. It whirled and twirled and the cupboard itself was engulfed in red-hot flames that shot twenty feet into the air. The fire was now so hot, so out of control, the men had to move back. All the men could do was stare as the cupboard was consumed and, minutes later, turned to ash. A stronger gust of wind blew in from the north to carry the ashes away.

Then the dance of wind and flames stopped as suddenly as it had started. The pit had been cleared.

“What the…? Man, this fire isn’t natural. That should never happen.”

Deep down close to the bulkhead, there was now a cavity, a dark hole into the earth.

“I’m going down,” announced Owen as he walked over and looked into the pit.

“Oh no, you are not. Not while I’m in charge.” Higgins was emphatic. “You saw what just happened. Fires are unpredictable.”

Higgins ignored Owen and directed his men to point their hoses at the remaining flames, now subdued but moving to consume what had not already fallen to their fury.

Owen quietly backed off, retrieved a ladder from the garden shed, and lowered it. As it came to rest on the ground, the flames moved away from him leaving only wisps of smoke.

Amazed, Higgins and his men just stared mouths hanging open. Owen used their moment of distraction to maneuver his body onto the ladder.

“Get back here,” Higgins bellowed when he saw what Owen was doing, but Owen ignored him. Higgins turned and called to his men, “Get me a proper ladder. Shit!”

At that moment Kian emerged from the cellar. Face covered in soot, she pulled herself onto solid ground. “Aidan’s down there.” She ran to Owen, grabbed his arm, and pulled him toward the dark hole. “Shot. Unconscious.”

As he followed Kian down the steps into the darkness, Owen heard Higgins bark to his men, “Come on, hurry up. Get me that ladder.”

When his eyes adjusted to the darkness, Owen found Aidan lying on the ground in a pool of blood. “Be careful,” Kian said. “We don’t want to re-open the wound.”

Owen knew there was no way to get Aidan to safety, not without supporting him under his wounded shoulder. He ordered Kian to take the other side. Together they hauled Aidan to his feet. Aidan groaned. “I can walk,” he struggled to say as he moved one foot in front of the other. He took two steps and collapsed again, his full weight born by Kian and Owen once more.

As they reached the bottom step, Owen saw Higgins and one of his men half way down, coming to them. The two men grabbed Aidan and hauled him up. Then Higgins hoisted Aidan on his shoulders and climbed the ladder out of the pit. He lowered Aidan down to the stretcher next to the two waiting ambulance attendants. Aidan was unconscious now, pale and his breath came in short gasps. The wound was bleeding again.

“Not good,” Owen heard one of the paramedics say before the two lifted the stretcher into the ambulance and slammed the doors.

Just then the final section of wall collapsed, filling the pit with flaming debris once more.

“I told you it wasn’t safe,” Higgins shouted at Owen as the firemen backed away again.

Kian whispered, “Bless you Paralda and all the Kings,” before she fell weeping into Owen’s arms.