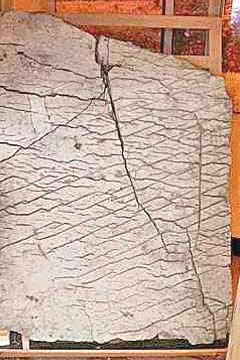 Here is what we know:

This is what Professor Alexander Chuvyrov of Bashkirskiy State University is saying:

“At first, we could not imagine the map was so ancient. Happily, relief of today’s Bashkiria has not changed so much within millions of years. We could identify Ufa Height, while Ufa Canyon is the main point of our proofs, because we carried out geological studies and found its track where it must be according to the ancient map. Displacement of the canyon happened because of tectonic stabs which moved from East. The group of Russian and Chinese specialists in the field of cartography, physics, mathematics, geology, chemistry, and Old Chinese language managed to precisely find out that the slab contains the map of Ural region, with rivers Belya, Ufimka, Sutolka,” – Alexander Chuvyrov said while showing the lines on the stone to the journalists. – You can see Ufa Canyon – the break of the earth’s crust, stretched out from the city of Ufa to the city of Sterlitimak. At the moment, Urshak River runs over the former canyon.”

As shown below, Professor Chuvyrov believes there are canals, dams and other environmental alterations depicted on the map.

Further, Professor Chuvyrov believes he has found inscriptions on the stone, but as yet these are undecipherable.

Primary arguments against the stone as a map:

When I first saw the Dashka Stone map, I thought it must be a natural stone that coincidentally suggested an area of the Urals. Now I am not so sure and do think it was human-made. But, whether 120 million or 3000 years old, it is remarkable as it does suggest air travel and monumental earth works—dams and canals—we would not expect to find in that area or era.