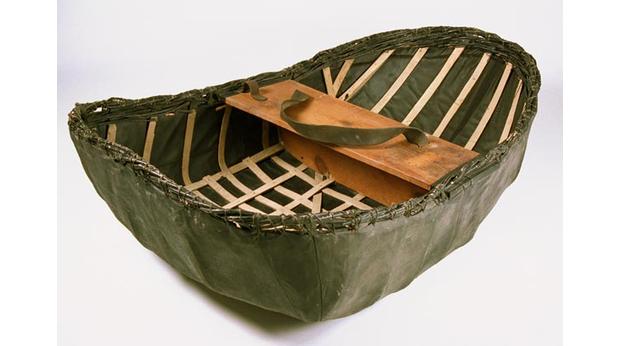 She sat staring at the flame, as had her mother before her, and her grandmother, and their mothers and grandmothers for countless generations before them. She allowed her eyes to grow softer and then she saw it, the dark tunnel that brought the Visions. Snippets, the vision always came in snippets and this one was no different:

The woman sat in the boat, her belly growing fuller like the waxing moon. They needed to find land before the baby came. The coracle, the small leather-bound boat, was too small for even the two of them, and the idea of giving birth there was intolerable. Yet, it might be so.

They sat shrouded in the mighty waves of fog rolling past them. Through it they saw nothing but more endless waves of fog. No sky, no land. Where they were, they new not.

She dipped her hand in the salty water, so unnaturally calm. The vast ocean, it seemed, had fallen into a dark slumber.

Crouched between the legs of her Druid Priest who sat on the narrow seat behind her, she felt him gently stroke her head. “This fog will not last forever,” he assured her as she drifted off to sleep.

Her uneasy dreams were of her mother’s sister, Boudicca, slain in battle and of the sacrifice–three fold death her brother had willingly undertaken. He gave his life for the people, but it did not stop the invaders and so, as the last remaining woman of the sacred bloodline, she and her companion had taken to the road.

The Romans had been relentless to her people, but it was her they were after for she carried the next High Priestess in her body. Of that they and she were sure. The omens had told them so.

Her dreams turned to their flight across the British countryside, their pounding ride on the back of a horse, their escape into tunnels and caves, hiding, always hiding.

They had intended to find a sturdier boat when they cast off in the coracle barely an hour ahead of their pursuers, but high winds and violent seas tossed them further and further away from the shore. Until there was no return.

Her companion read the stars then, and they had used their one blanket as a sail when they tired of paddling.  They followed the ice flows and journeyed west toward the land they called “the Refuge of the Setting Sun.”

The rains had been good and they had collected the water, abundant enough this time of the year. But the dried meat had given out long ago and so they fished for what they needed. It was not pleasant eating the raw flesh and she hated watching as her companion killed the fish and scraped their scales back into the sea. But that was the way of the Mother—to give and take life when needed so that the next generation might live.

How long she slept she did not know, but the baby kicked and then she felt her priest, her companion stir.

“The stars are out,” he told her. “Look, it is the Hunter. See his belt and his blue dog star?” He pointed off in the distance. “That way. Can you paddle?”

“I can,” she said reaching for her oar. “Have we drifted too far back to the east?”

“I do not think so, but how far south we have gone, I do not know. Here, take the seat, I will kneel as we paddle.”

The waves picked up then, working with them now. They pulled on through the night and into the morning before her companion called a halt and pointed once again. “Do you see it?”

She strained her eyes and saw a dark patch on the horizon. Land she hoped and they pulled at their paddles once again, this time not caring that the pain of exertion tore at their shoulders and backs.

When she saw there were trees, she almost cried for the joy of it. But when she saw the waves crashing on the rocks, she grew anxious again. To wreck the boat now could spell their doom— even if their bodies survived, they needed the coracle to shelter them through the coming winter. Upturned it would be a secure roof over whatever they could fashion for a shelter.

“What do you foresee, my lady?”

She settled into her self and sent her senses out. “An island I think. It will be calmer on the other side. Follow the shore line. It will not be long now.”

“And the people Boudicca spoke of?”

“There will be a sign there, I think. An inscription in the rocks.” She opened her eyes and saw the sun was past its zenith. She prayed they would sleep on solid ground that night.

The sun had not yet set when they spotted a narrow channel leading to the far side of the island. The tide was with them and they came to a narrow beach. Her companion eased himself over the side and found footing. He guided the boat onto the pebble strewn shore and safety.

When she stepped from the boat, her legs threatened to buckle beneath her. How many months had it been since she had stood? It took a moment to catch her balance again. But when she did, she looked to the west across the narrow channel and saw land that was vast and fertile.

Then she turned and faced the direction from which they had come and repeated her small ritual, but in silence this time. When she had finished, she held her hands at her heart, “May we remember our past, may the old ways be preserved, may the knowledge pass down through our children until it is time to bring it into the world again.”

The last rays of the sun sank below the horizon. She turned to see her companion working his way down the shore gathering driftwood for a fire, one that would be welcome after so many cold nights in the boat.

Out of his earshot now, she raised her arms to the sky in celebration and sang the Mother’s name, the secret name that was tens of thousands of years old, the name only the priestesses knew. The name she would one day teach her daughter.

4 thoughts on “Book of Knowings: Autumn Equinox in the Time of Our Ancestors”